I Was a Music Missionary… And Other Fun Facts About Lesley

August – aka. back to school season – is such a fun time to step back and do a bit of a refresh. Since there are a bunch of new followers around here (heyyy!) I wanted to start fresh with y’all and share 10 fun facts about me that you might not know…including the fact that I spent a year on tour as a music missionary. Interior design might be my passion and my career, but there’s more to me than just the pretty interior photos I share on social media.

I grew up doing musical theatre.

From grade 4 pretty much through the end of high school, I was involved in local community theatre. I. LOVED. IT. Even though I was just in the chorus and never had a leading role, I couldn’t get enough of the atmosphere, camaraderie, and excitement of performing. Which is funny, because I also had stage fright! It was easy to be confident as part of the crowd, but as I got older I had to be uncomfortable to get comfortable performing.

My first job was a radio commercial when I was 12.

I recently found a copy of the paycheck from this gig that my dad saved, for a whopping $60. But that’s not bad for a couple hours of work for a 12 year-old! I remember being mortified during recording though, because they asked me to use a boy’s name in the script and I blurted out the name of my crush, Zach. WHOOPS. I was totally outed in front of my parents.

I was president of my high school.

Yup, I was Student Council President in grade 12. My bestie was Vice-President and it was pretty much one of the best years ever. The role came with some cool privileges – like doing morning announcements every day and being excused from being late for math class – but I may have taken advantage of that and nearly failed math that year. Another whoops.

Ugggh. Their wings are so beautiful, BUT THEY ARE JUST BUGS WITH TOO MANY LEGS THAT FLY ERRATICALLY. Big nope from me.

My favorite band is Lifehouse.

“Hanging by a Moment” was my favorite song when I was 16…and still is. Lifehouse’s first album, No Name Face, came out in 2000 and changed my life. It was the soundtrack of my late highschool years, and still holds up for me as my favorite album of all time. Lifehouse forever.

(Bonus fun fact: I took a photo of the lead singer, Jason Wade, at the first Lifehouse concert I went to and carried it around in my wallet. I joked that it was “my pocket-sized boyfriend.” It’s still in my wallet today.)

I spent a year on tour as a vocalist with a music ministry.

When I was 25, I left a 4-year career in interior design in Toronto to join a music ministry. I was burned out by a very Devil Wears Prada-type boss and needed a change. I quit my job, packed up my apartment, and spent a year in a van touring the US, Canada, and Taiwan sharing the gospel through music, testimony, and ministry. We played concerts at schools, events, prisons, youth retreats and homeless shelters, and spent each night with a new host family. I didn’t become a Christian until I was in college, but now it’s a huge part of who I am, what I do, and how I do it.

I am so grateful for the growth I experienced that year. It was incredibly difficult but insanely rewarding and changed the course of my life completely. It’s also where I met my husband!

I’m always so curious to know how tall people are! I’m probably taller than you think from photos, which surprises people.

And in heels, I’m eye-to-eye with my husband Nate who’s 6′ tall.

My first tattoo was 5 rainbow-colored stars down my spine, which I had wanted since I was 15. I have a stained glass window on my right shoulder which I got while on tour with the music ministry – it’s based on a window in a church from one of our first concerts. My third tattoo is on my left forearm, and it’s a copy of a flash-style tattoo my Granda has – but we put our wedding verse on it, 1 John 4:19. (Nate and I each got the same tattoo as a wedding gift to each other!)

My most recent tattoo is a color wheel on my right calf, that I got on a whim last fall. Nate and I were on an overnight trip to Toronto, and decided impulsively to get tattooed while we were there. Totally crazy, but I love it.

I lost my brother in a motorcycle accident.

Bummer, right? Sorry to drop that one in after all this lighthearted stuff, but it’s important. My only sibling, my brother Malcolm, died at age 26 when he was hit head-on while riding his motorcycle. That’s the kind of stuff that changes your life forever.

It’s a reminder every day to me that Life. Is. Short. I’m not going to waste my one and precious life playing it safe. I’ve taken on entrepreneurship and I’m committed to making my dream of empowering millions to bust out of boring a reality. I think Malcolm would be proud.

Ice cream is my favorite! I have a serious sweet tooth. But I decided to challenge myself to give it up for an entire year. I haven’t had ice cream since December, and I’m still going strong mid-August.

I’d love to hear from you on Instagram – what’s one cool fact about you that not everyone knows? 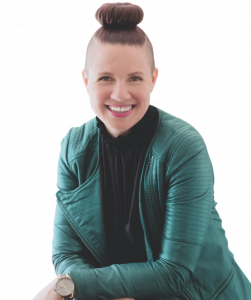